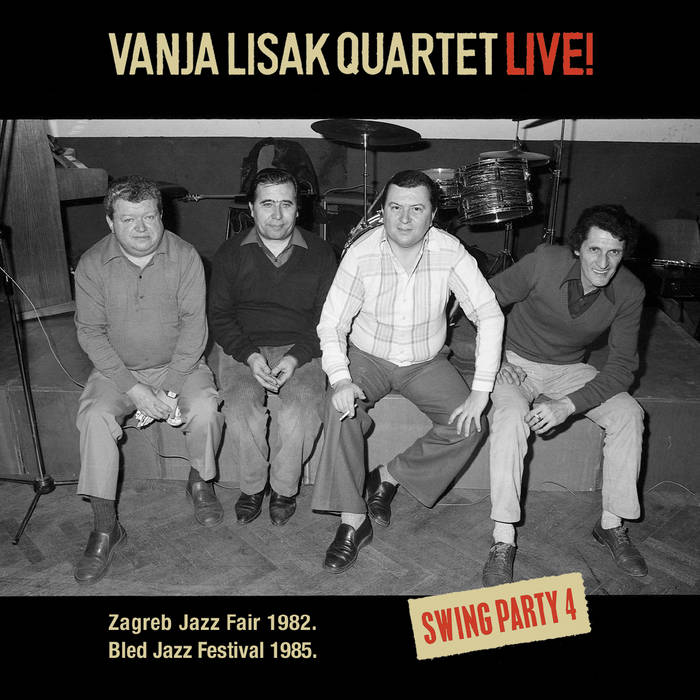 Vanja Lisak was a well-known director of the Zagreb Festival, a member of the Croatian Radiotelevision Popular Orchestra (HRT) as well as an editor and producer for the HRT, pianist, composer, arranger and producer. After participating in several Zagreb jazz ensembles, Lisak decided to establish a quartet at the beginning of the 1980s that would perform in clubs and at jazz festivals. It has remained the best-known ensemble of Lisak’s career. Along with Lisak, the Quartet also included clarinet player Vladimir Bolčević, bass player Zvonimir Makar, who replaced Mladen Kos from the original lineup, and drummer Vladimir Vuković. Whoa, this was a spectacular foursome! Whenever I went to their gigs I knew I would be treated to a terrific jazz show – a real “swing party”. They always performed with big smiles on their faces and special fervor, as if there was nothing more important in the world at that moment.

These recordings are an excellent example of the positive atmosphere in the Vanja Lisak Quartet. Their performances were always full of life and humor, joie de vivre, zest. They were exuberant, they swung, they moved. If you relaxed and enjoyed yourself, they would captivate you and take you to a world of musical magic, and you would start moving unconsciously and eagerly – you would snap your fingers, tap your feet, pat your knees, twitch your shoulders.

Lisak had always been aware of the importance of promoting Croatian jazz works. So, apart from performing jazz standards from the early period in the traditional jazz style, they also performed two of his compositions, including “Podroom Blues”, and one by Nenad Grčević. Lisak’s Quartet regularly played in Zagreb’s club Podroom before a substantial audience, mostly a younger crowd. New generations of jazz aficionados were reared at these exciting gigs. Inspired by the welcoming and stimulating atmosphere on the gigs in Podroom, which often turned into jam sessions, Lisak wrote a composition that expresses that high-spirited approach.

Another important venue were jazz was played in Zagreb at the time was Lapidarij. Lisak also performed there in 1982 as part of the Zagreb Jazz Fair festival that featured performances by the great names of jazz music. This recording has been salvaged and is published in the first part of the album.

This was music that was ideal for gigs in clubs, where you came in direct contact with your audience. And judging by the reactions of the crowd that one can hear at the end of these performances it is obvious that the Vanja Lisak Quartet had great rapport with their audience even in concert halls such as the one in Bled where the recording that makes the second part of this CD was made in 1985. This was not his first performance at this reputable festival, where appearance alone was a sign of prestige. In fact, he performed at the 2nd Bled Jazz Festival in distant 1961 as a member of the Ladislav Fidri Quintet.

Apart from the artistic value, the release of this CD also has a musicological value. Music has been preserved from being forgotten and the public has been presented with material that deserves to be documented and valued in the context of Croatian jazz history.

Bandcamp Daily  your guide to the world of Bandcamp